Over the past few months the Great Barrier Reef has experienced what has widely been reported as the ‘3rd mass coral bleaching event in five years’. Reporting has suggested that widespread, severe bleaching has affected large swathes of every region of the reef (Link).

The holobiont that is the coral animal possesses a crucial symbiotic relationship with a single celled algae from the family symbiodinium commonly known as zooxanthellae. Coral is like an upside down jellyfish. It has tentacles that reach out into the water column and catch passing microscopic plants and animals. Despite being adept at feeding themselves many corals acquire the majority of their food and energy from the sugars and other nutrients passed down from the photosynthetic activities of the symbiotic algae. These microscopic inhabitants enjoy the creature comforts of a safe haven inside the coral tissue benefiting from the plentiful supply of sunlight in the clear shallow tropical waters where corals thrive.

Why do Corals Bleach?

Coral bleaching is a complex issue not easily understood or communicated. When the symbiotic relationship between coral and zooxanthellae is disturbed the corals are forced to expel the algae. Corals are beautifully adapted to their ambient environment (Figure 1). When those water temperatures increase above normal means for a given location they can bleach. It is not only the temperature that causes bleaching but the ultraviolet light that the zooxanthellae usually thrive upon can become too intense during stressful times. This high UV radiation causes the algae to over-metabolise requiring the coral host to expel the algae as a means to protect themselves. Bleaching can also be induced by sedimentation, cold water, fresh water or other stressors that can occur. However most bleaching, especially widespread bleaching is usually brought on by elevated sea temperatures.

Why do corals Fluoresce?

In healthy corals, much of the sunlight is absorbed by the photosynthetic pigments of the algae. When stressed by excess UV radiation some corals upregulate fluorescent pigments in their tissue to act as a sunscreen from the incoming light and associated damage (figure 2). As corals recover the fluorescence recedes as the zooxanthellae can none begin to absorb the incoming light and the excess fluorescent pigments are not required. Recent research has hypothesized that fully bleached (white) corals may struggle to recover as the light regime inside the tissue of the fully bleached colony creates unsuitable recovery conditions.

Why do some corals bleach and others don’t?

Some coral colonies have a greater tolerance to bleaching and heat stress than others. This is driven by a number of biological and environmental factors. Some corals have internal mechanisms (like thicker tissue layers) to protect the zooxanthellae from UV radiation (Figure 3, 4 & 5). Others have strains of heat tolerant symbiodinium that can withstand higher temperatures. Others might be fortunate to be in the lee of a large rock or overhang that can provide shading and protect the coral during stressful times.

Figure 3: Some corals glow white due to the loss of their symbiotic algae while others remain healthy and vibrant. Image taken Florence Bay, Magnetic Island 1st May 2020

Figure 4: Some corals glow fluorescent or white due to the loss of their symbiotic algae while others remain healthy and vibrant. Image taken John Brewer Reef, Offshore Townsville 5th May 2020

Over the past two months we have completed surveys of reefs across three regions of the GBR, Cairns/Port Douglas (2 locations), Townsville (11 locations) and the Whitsundays (6 locations). At all locations we have completed transect surveys, stationary point counts and colony level reef health surveys (Figure 7 & 8).

All locations were subject to various levels and severity of bleaching but overall bleaching was mild, many species were in recovery and mortality was extremely low. Across all sites and locations bleaching was evident and ranged between 1% to 60% of the local coral population. This sounds like a lot, and it is, but the complementary factor to consider is that the severity of localised bleaching was generally low with most colonies showing only paling or mild bleaching. This means that if conditions become more favourable quickly there is a strong chance they will recover.

Figure 7: Reef Check surveys are conducted along a 100m transect line laid on the reef. 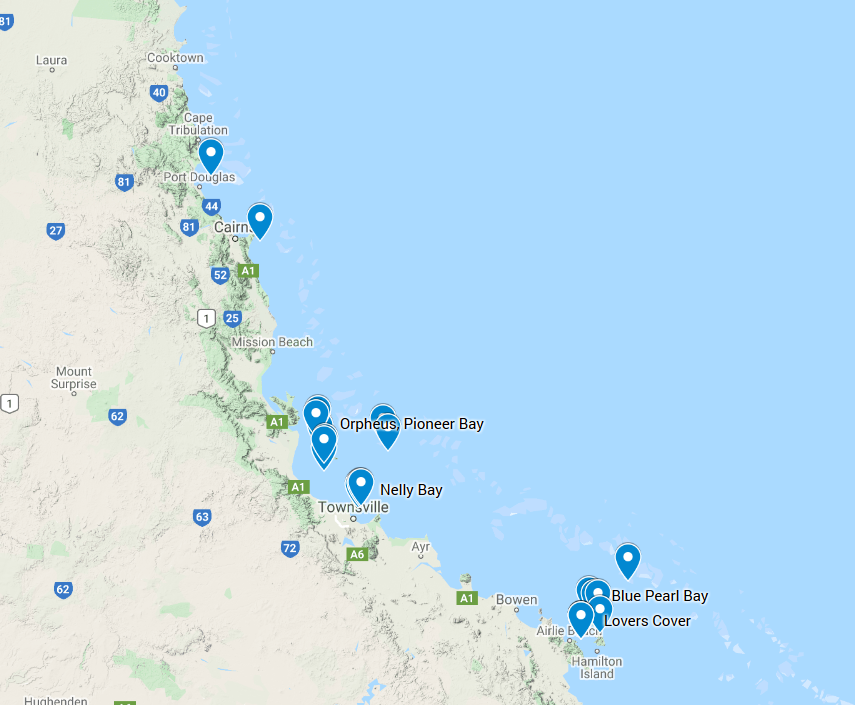 Thankfully, during our surveys prevailing observations have highlighted significant recovery across all locations. Many corals remain pale, and some are completely white as they slowly recover their population of symbiotic algae zooxanthellae. Recovering corals are evident as the bottom half of a colony will be brown, green or some combination of these colours, while the upper surface or branch ends remain white. Almost like it is slowly filling up with colour and life (Figure 9 & 10).

Figure 9: Acropora sp coral showing bleached branch tips but a healthy population of algae (as evident by the brown colour in the rest of the colony) indicates this coral should make a full recovery. Image taken at John Brewer Reef, offshore Townsville,  5 April 2020

The prevailing weather conditions that lead to this year’s bleaching was very warm sea temperatures throughout February. Cloudy, windy and at times rain bands swept through the Great Barrier Reef through the month of March and this factor played a significant role in the cooling of sea surface temperatures and stabilising heat stress on corals across the region. What this means is corals were not subject to persistent heat stress over extended periods of time as occurred in 2016 and 2017 in some regions of the Reef. However the story is complicated as the prevailing weather did cool the reef slightly, sea surface temperatures remained higher than past averages (Figure 11). 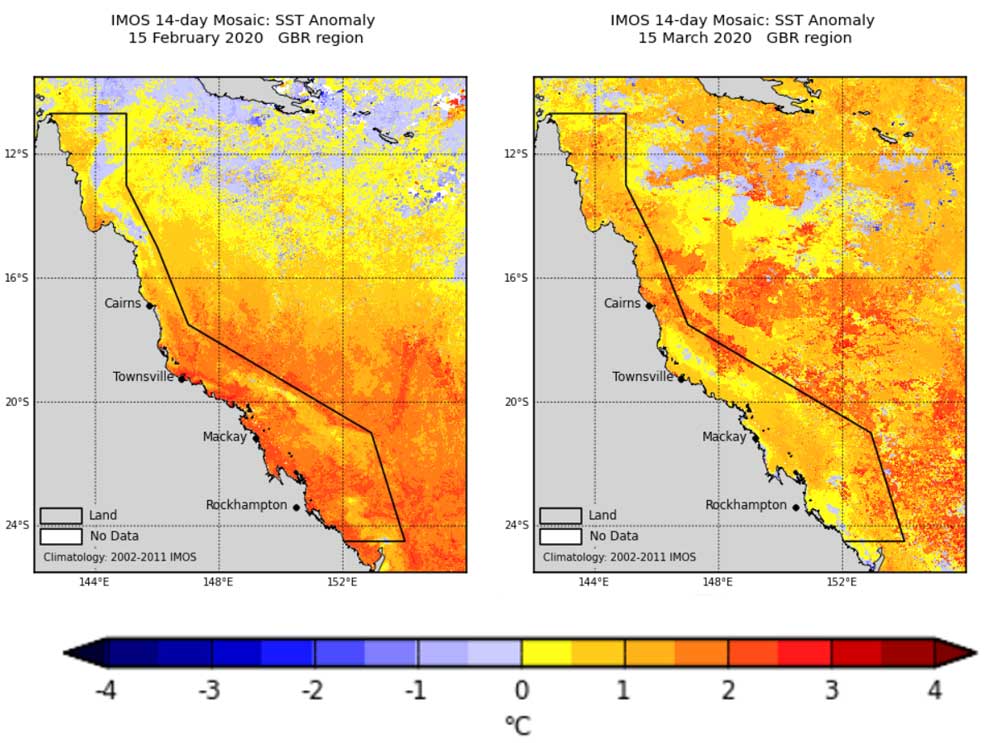 Figure 11: Heat stress across the Great Barrier Reef in February and March 2020 highlighting above average sea surface temperatures throughout the Reef. Heat stress was higher in February compared with March in many locations. However, while the temperature abated, it remained above average throughout March continuing to put pressure on reef areas. Source: Australian Bureau of Meteorology (http://www.bom.gov.au/environment/activities/reeftemp/reeftemp.shtml)

The Future of the GBR

Thankfully in the areas of the northern and central region of the GBR that we have surveyed mortality has been minimal in 2020 and many bleached corals are on the path to recovery. Whilst it would appear that these regions have ‘dodged a bullet’ this year, mild stress events like these continue to erode the resilience of the reef lowering tolerance thresholds to future stressors. Bleached corals may recover, but the energy they expend in surviving through these events may limit their growth, reproductivity and future resilience. There is some hope that mild events like these may assist corals to develop higher thresholds for elevated temperatures, but this is yet to be proven.

As a community we must continue to support the ongoing health and resilience of the Reef by undertaking sustainable activities in our everyday lives, encouraging policies and procedures that are going to protect the reef, vote for politicians who commit to making tangible inroads into mitigating climate change stressors.

This work has bee supported as part of the Integrated Coral Reef Citizen Science Program, funded by the partnership between the Australian Government’s Reef Trust and the Great Barrier Reef Foundation. Reef Check Australia is also supported by funding from the Townsville City Council for monitoring and community engagement in the Townsville and Magnetic Island region.