Why does the World Of Restoration and Education Inspire? 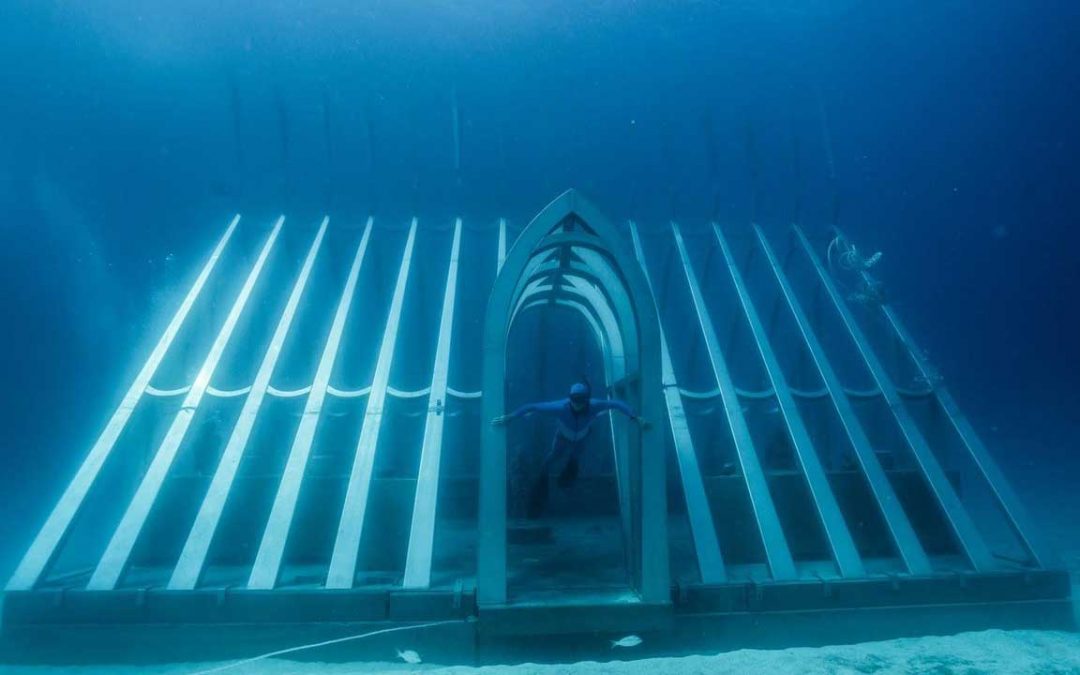 I love swimming on coral reefs. The colours, the biodiversity, the peacefulness and the energy all combine to create this powerful, serene, complex underwater structure. The weightlessness of being underwater…there’s nothing like it. 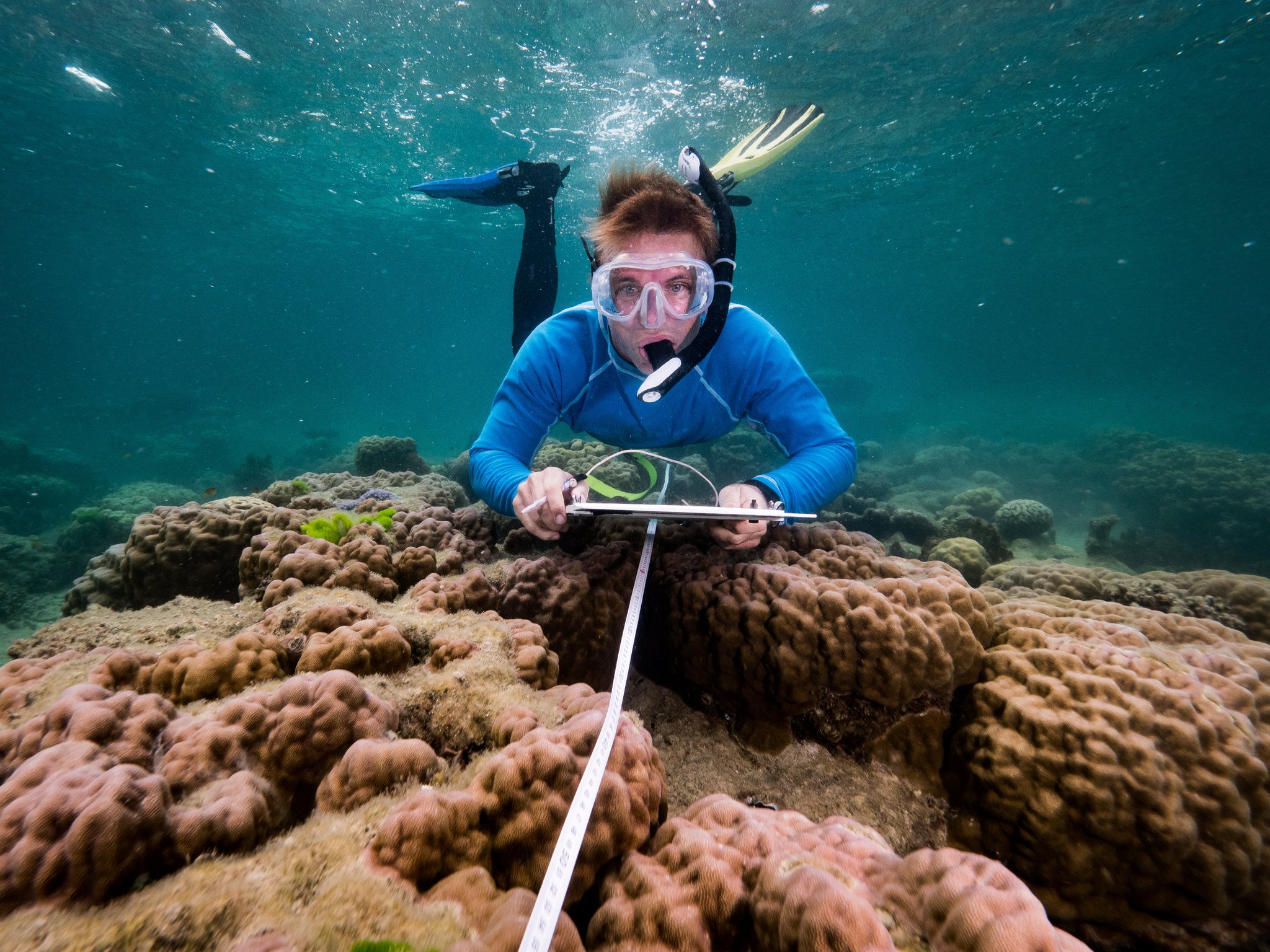 At John Brewer Reef the complexity and power of the reef is complemented by some amazing, breathtaking artwork. An enormous structure of stainless steel and cement sitting on the ocean floor. On first impressions you think to yourself, should this really be here. I mean what is it doing there? But as we descended into the depths of the Coral Greenhouse, the main feature of the Museum of underwater Art’s installation, emerges as this enormous underwater feature. Like a Mayan temple emerging out of an Amozonian jungle, the Museum of Underwater Art (MOUA) appears as we descend. There is an eerie glow about its girth. After only a year nature is already starting to consume and take over this man-made structure. 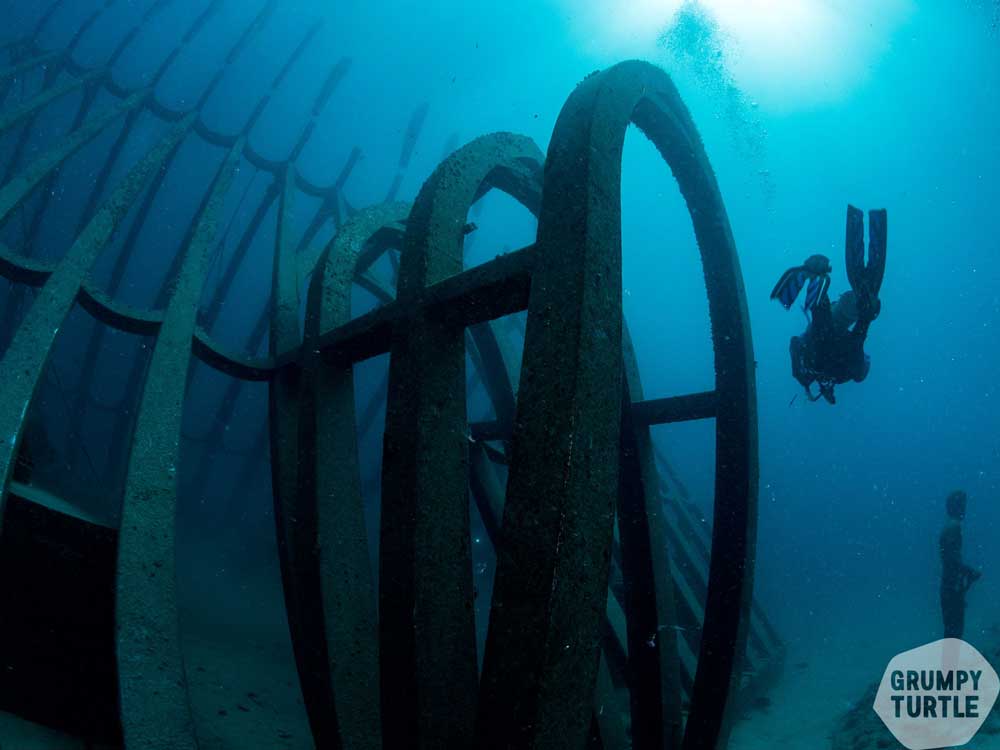 Only two weeks ago I accompanied a team of volunteer marine biologists and community citizen scientists to undertake the process of ‘coral gardening’ at MOUA’s Greenhouse. The structure was designed as a transplantation location for corals to demonstrate the restoration process of transplanting live coral colonies from alternate locations to assist the recovery of areas of the Reef that may have been degraded, damaged or destroyed. This installation however has a slightly different purpose. 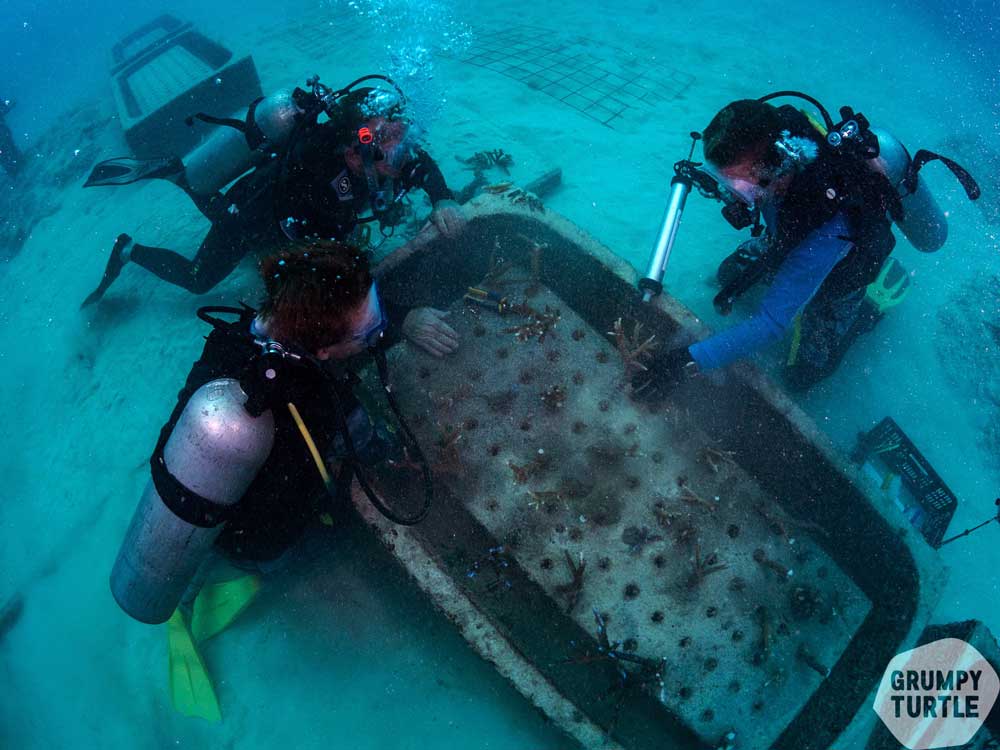 “Restoration is defined as the process of assisting the recovery of locations that have been degraded, damaged or destroyed”.

The MOUA on the sandy seabed, surrounded by beautiful, healthy coral reef. The purpose of underwater art is to draw people to the Reef and spark conversation about the challenges it is facing and what we can do to help it sustain and thrive. The coral gardening process aims to demonstrate restoration processes, by sharing knowledge about the things that we can do as human beings to support the health and resilience of coral reefs worldwide. Through education we hope to raise awareness about the challenges the reef is facing, and inspire people to implement changes that can help support the Great Barrier Reef.

Many of the sculptures that inhabit both inside and outside the Greenhouse are modelled on local Traditional Owners. These custodians of the Reef are testimony to the tens of thousands of years of sea-country connections of these First Nations people who now have a permanent place within this modern cultural heritage of the Great Barrier Reef. 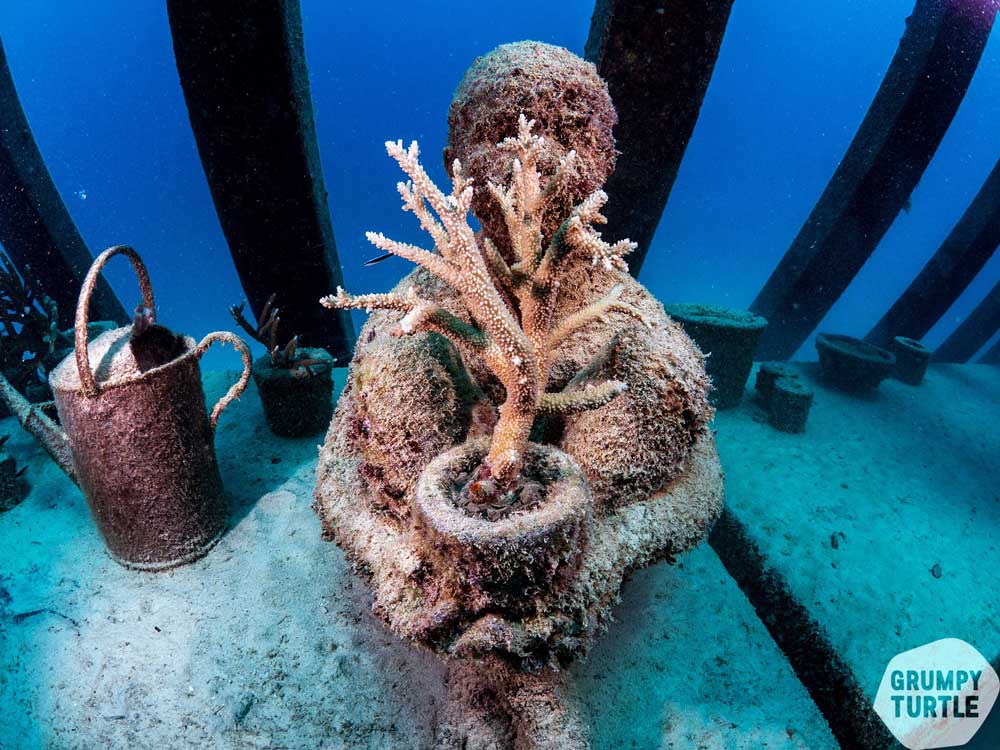 The artwork itself is designed to provide a world-class experience for visiting domestic & international guests. Located at 16 m deep it is best experienced by scuba-divers who have the opportunity to explore both inside and outside the greenhouse. Until recently the attraction was limited to the man-made structures and the small amount of new life that has developed through natural recruitment processes. But with the addition of live coral comes a new phase In this art installations development.

Adding coral adds a new dimension as many coral associated organisms will quickly inhabit and the interstitial spaces in, between and around the recently introduced living elements. Colourful butterflyfish are often associated with live coral cover and will migrate to pick at the epibionts (small creatures living on the outside) of the coral colonies. Damselfish will use the structure to seek shelter as they cautiously edge away from these refuges to feed on passing plankton. Small crabs and shrimps will take up residence in the protective spaces between branches. Life will begin to explode on the artificial structure, and the transformation from man-made to something in between is well and truly underway. 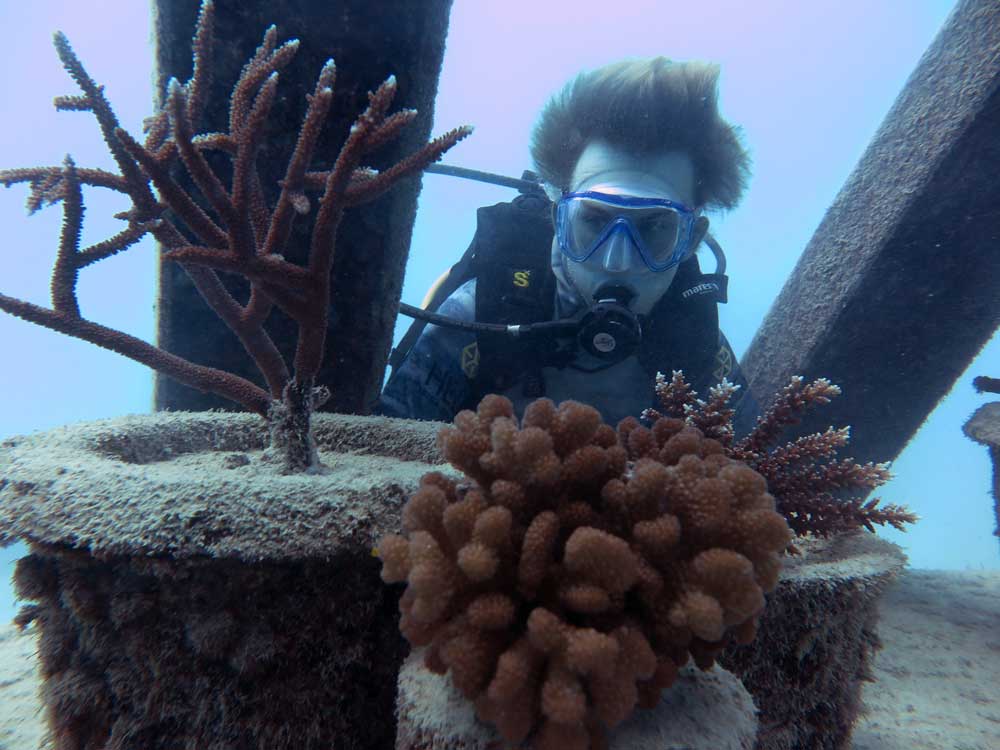 I have been fortunate to dive and undertake restoration activities for over 15 years. During that time my most trusty sidekick and research assistant has been my son Kailash. He has been fortunate to grow up on a small island in the Gulf of Thailand where he was homeschooled and learned to scuba-dive and discover the world of coral reefs first hand from a very young age. 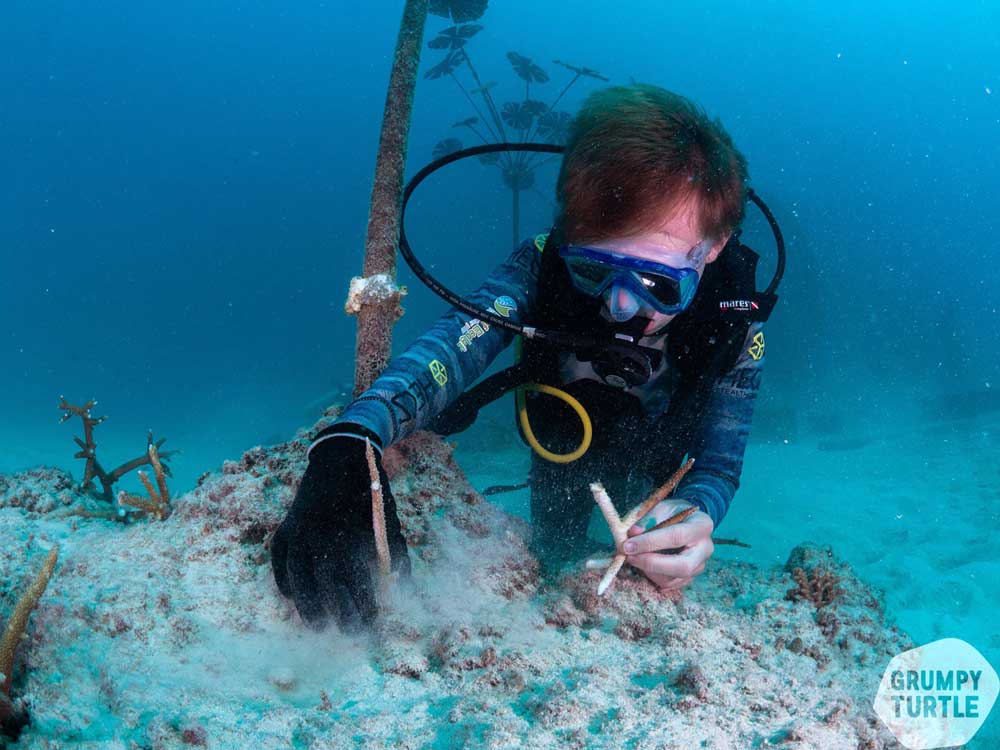 Now an intern with Reef Ecologic Kailash was assisting on collecting data for the ongoing research we are undertaking. As we descended to the greenhouse. We were fortunate to be the first ones in the water so none of the fish and other marine life had been disturbed. Without communicating verbally we both paused on the outside of the greenhouse and just observed what was happening. Giant barracudas Rome the interior halls of the greenhouse. Herbivorous parrotfish and surgeonfish grazed on the algae that proliferated over all the flat surfaces. Curious Emperor fish took refuge amongst the sculptures looking inquisitively in our direction wondering who the strange creatures were in their world. A juvenile yellow boxfish poked its head out of the crack between the benches and hardly ducked away. See cucumbers scoured the floor looking for morsels of organic material. It was a pleasure to just sit and observe and wonder. 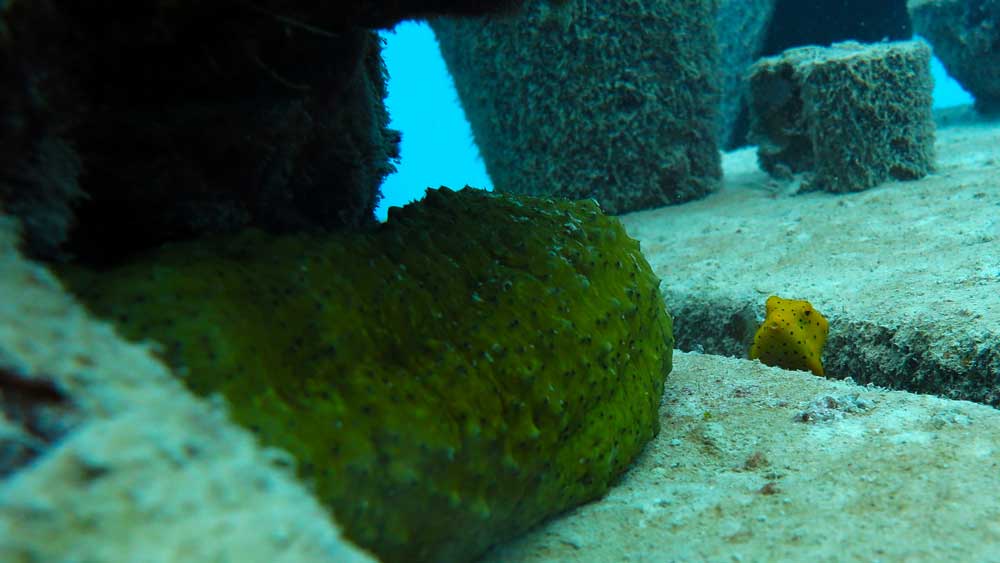 We have deliberately added corals to only half of the Coral Greenhouse so we can measure the effects of adding corals on artificial installations like these. We aim to measure if, because of these additions, the structure is aesthetically more pleasing, the sculptures recruit more fish and invertebrates and is ultimately a more enjoyable experience. 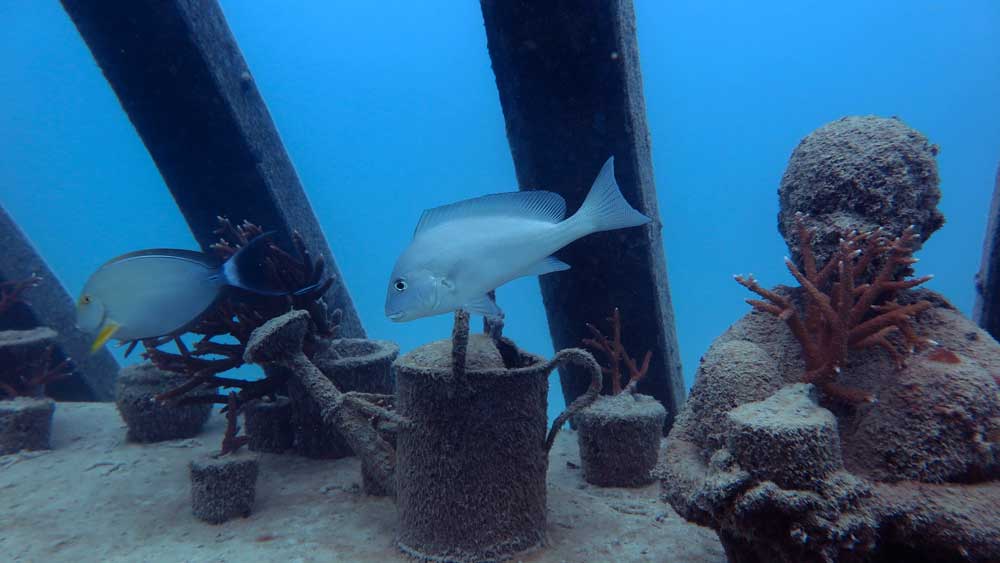 One of the most exciting things about this visit was the sheer volume of tiny little recruits of soft corals, sponges, algae and other encrusting organisms starting to inhabit the sculptures. The artist Jason deCaires Taylor has said that he creates the artwork but once it is in the ocean he is passing it on to a new master. The expectation is that it will change and grow and develop over time as a living piece of art developing and changing reflecting life itself.

On one particular tree sculpture I was super excited to see a tiny coral recruit of a Pocillopora spp coral. I started to examine other leaves on the tree and noticed that on almost every leaf there was a new Carl recruit. It’s testament to the fact that if you put structure into the ocean life will gravitate to it in one way or another. That doesn’t mean throwing structures in just for the sake of it but the complementary nature of this artwork and its natural development will no doubt create an amazing experience that will only get better over time. 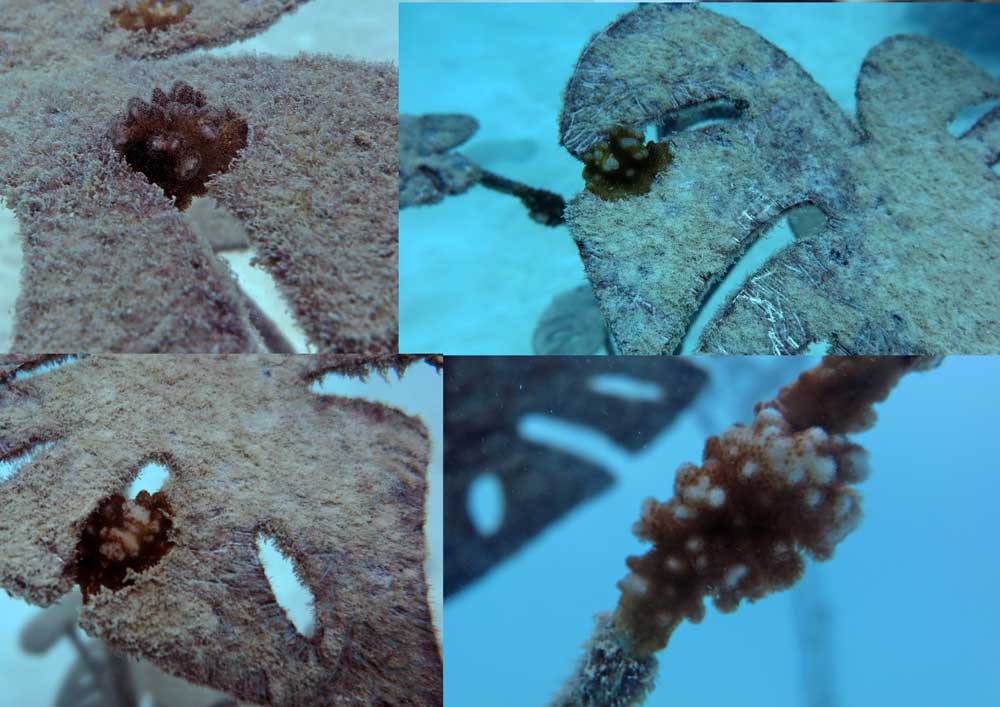 Once our observations at the Museum of Underwater Art were complete we went to explore the nearby reef itself. John Brewer Reef is truly spectacular., The top of the reef is shallow and when the tide is low it’s probably about 1 m deep. Perfect for snorkellers! Live coral cover is somewhere in the vicinity of 60 to 70%. The reefscape is one of the best in the region. We took the time to explore the reef wall, and the many caverns and interstitial spaces that make this location really special. 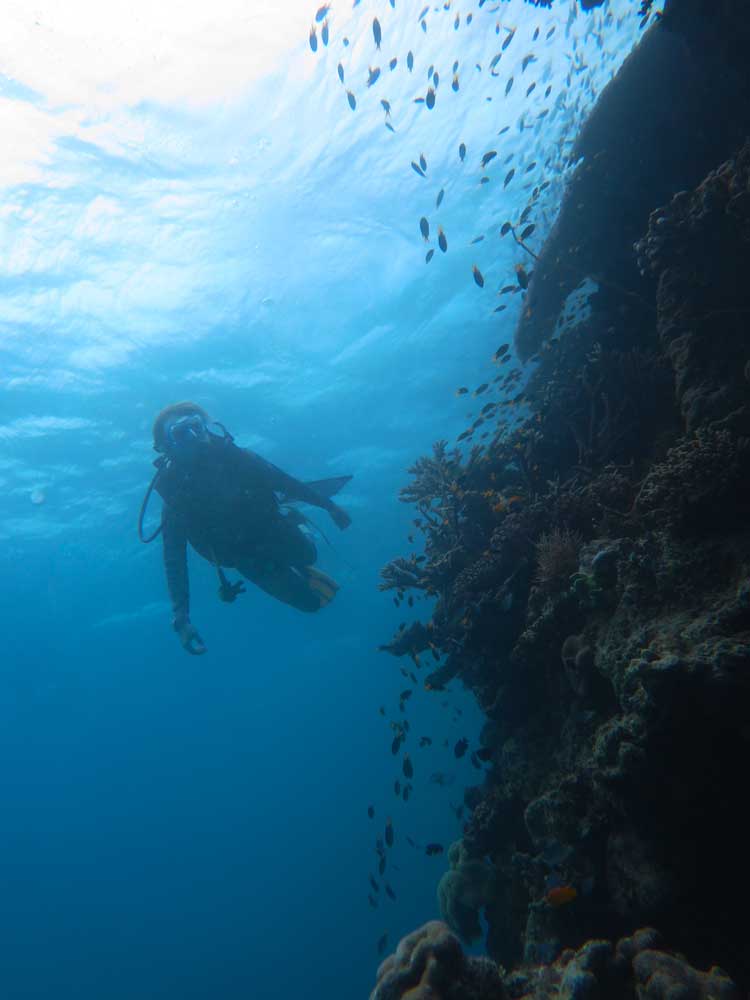 They say that connection to nature supports physical and psychological well-being. I know when I am at places like John Brewer Reef and the Museum of underwater right I feel inspired by humanity, the things that we can achieve and the potential for good in this world. The challenges that the reef faces are immense.  But these challenges are being mimicked the world over. We hope that by introducing people to restoration activities we can inspire people with the notion of hope mixed with action to demonstrate that we can do something.

Thanks to Woody Spark for many of these images.