Following the third mass bleaching event of the past five years and the damage caused by cyclone Debbie in 2017, the reef at Manta Ray Bay, at Hook Island, in the Whitsundays has seen significant losses in coral cover. Tourism operators in the area rely on healthy reefs such as these to bring in customers and provide experiences people will not forget. Combined with the limitations posed by the COVID pandemic, local businesses; especially those reliant on tourism, have faced challenges.

To mitigate this, Reef Ecologic have been growing coral fragments on midwater ‘rope’ and ‘table’ nurseries at Manta Ray Bay, with the aim to plant these fragments back onto the reef once they are large enough. After one year of growth on ‘rope’ and ‘table’ nurseries, these coral fragments were ready to move out and start a life of their own. As an intern at Reef Ecologic, I was given the opportunity to work alongside local tourism operators from Red Cat Adventures, Ocean Rafting and Daydream Island Resort; a squad of young, like-minded individuals with boundless enthusiasm for the cause.

Before setting foot in the water, the Reef Ecologic team met at the house of Nathan Cook; creator and scientific director of the project, to discuss materials and methods. The team worked to create site markers, coral tags and marker tapes to make sure everything was ready. It was decided that the ‘coral discs’ used to attach fragments on the ‘table’ nurseries would be cemented to the substrate using caulking guns filled with a specific blend of ingredients. The string of rope-grown coral fragments would be nailed to the substrate and secured using coral clips. Locations to plant the fragments were identified as coral bommies with an area bigger than 5x5m2 , which was marked to track the growth and propagation of corals in the future. Fifty fragments from each ‘rope’ and ‘table’ nurseries were destined to be planted on each of the five suitable new homes, to be compared with three ‘control’ bommies over time.

Teams from Reef Ecologic, Red Cat Adventures, Ocean Rafting and Daydream Island Resort moored up to Manta Ray Bay and work started swiftly. Nathan began by marking out the sites with buoys and tapes as teams moved in to survey the planting sites using the photo-quadrat. All the while, teams of divers began removing coral fragments from the nurseries and swimming these over to their new homes. Tasks were delegated and Reef Ecologic paired up with members from the local tourism operators to begin cementing coral discs and nailing ropes entwined with blooming corals to all available real estate in their new locations.

As an intern at Reef Ecologic, I was trusted to supervise members of Red Cat Adventures and assist in the removal of fragments from the nurseries and the planting of both ‘table’ and ‘rope’ grown corals. I was also given the responsibility of performing the photo-quadrat surveys for sites before corals were planted. Dr. Adam Smith; director of Reef Ecologic and head of big-picture operations for the project, kept a close eye from the surface and used his freediving expertise to keep the teams stocked up with cement-filled caulking guns so well that operations never stopped. All teams felt safe and secure in the hands of Gemma Molinaro; experienced SCUBA instructor and head of safety for this project, who made sure everybody was diving safely and comfortably. Teams on the surface made the most of their intervals by involving themselves with the preparations of fresh caulking guns, interviews and relaying supplies and information to those in and out of the water. 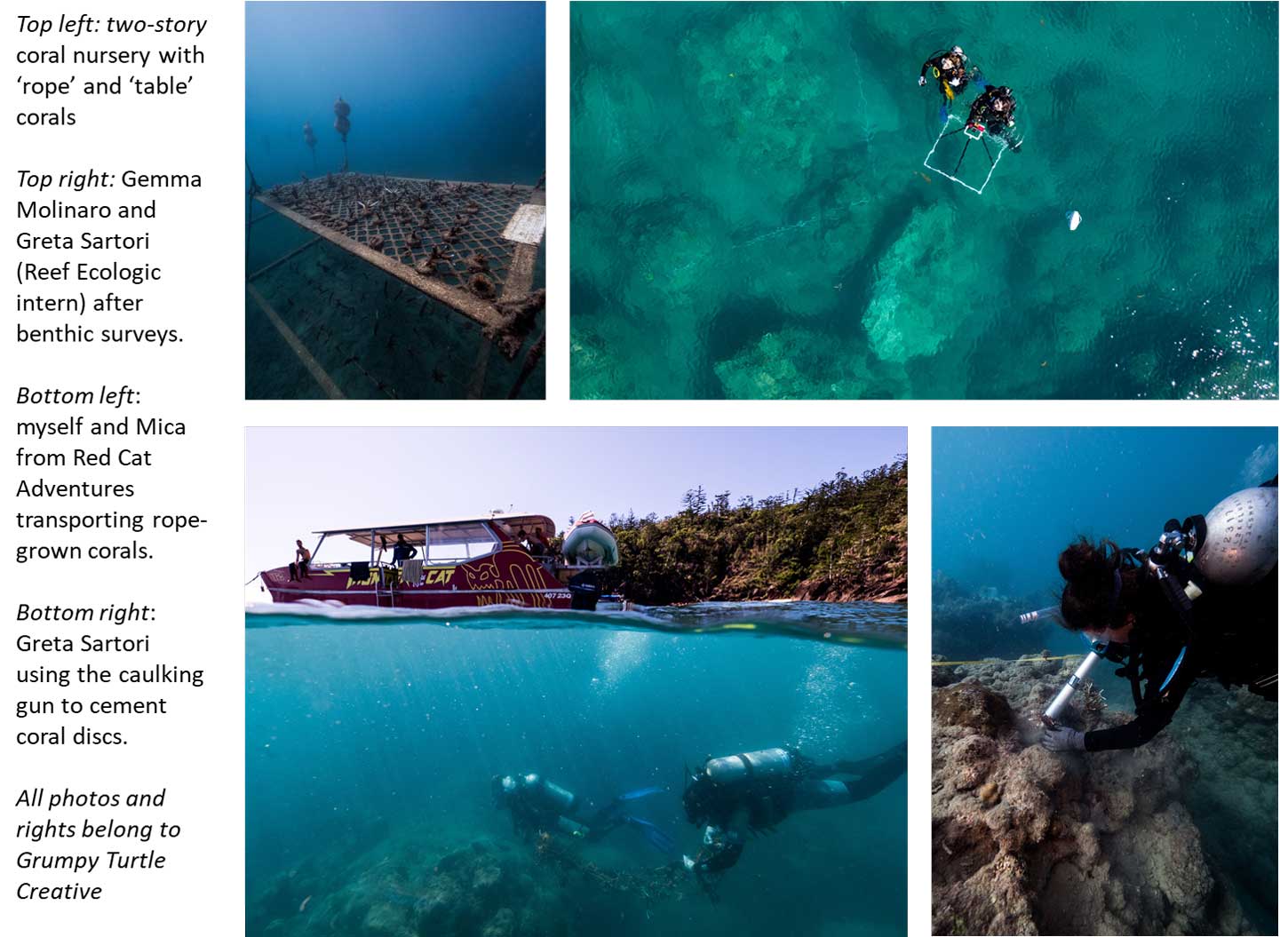 With over 600 corals planted in just two days, you can understand why some of the tourism operators were referring to the core staff at Reef Ecologic as “coral MacGyver’s”. Without the fantastic effort from Harriet Spark and Richard Woodgett from Grumpy Turtle Creative to document the whole process and tell the story with their incredible photos and videos, you might have thought I was exaggerating the scale and efficiency of the whole project. I believe the experience resonated with all of those involved, including the local tourism operators and will have significant benefits for future stewardship and awareness for the Whitsundays region.

I can’t thank Reef Ecologic enough for the opportunity to be a part of a project so special and unforgettable and I am very proud of what we accomplished.